"He is a very good horse, [and a horse] with spirit who likes his work." -Conrad Schumacher

"Working with and training Landsong has been, and continues to be, an absolute JOY! Rarely have I seen a stallion so intelligent, willing, and quick to lean- and yet so polite and well mannered that a child can handle him. As a trainer, I see time and again that flashy gaits are nothing without a sensible mind to cultivate them. Many, many stallions have a trot that will impress you, but Landsong also has a unique ability to cover an astounding amount of ground in both his walk and canter. A dressage horse must have THREE good gaits to excel. From a training standpoint, this coupled with the fact that he loves to work and enjoys his job, makes him an excellent choice to breed to."
-Mary Howard of Five Stars Farm
Pan American Games Winner, 1986 World Championships Highest Placed American Rider, Short-Listed for Seoul Olympics 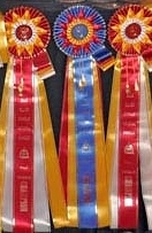